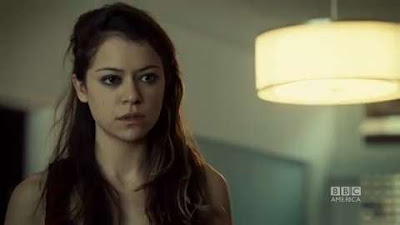 Orphan Black’s concept is so complex that we probably won’t know what it is until the third episode. Normally, this would make me hang my head and weep, but writer Graeme Manson (the man behind the film Cube which should tell you a lot) pulls it off by simply earning every beat. Instead of rushing through each moment so he can fit his massive and unwieldy concept into a single episode, he lets the plot progress, making sure to earn every choice and every character’s motivation.

The plot, as far as I understand it, is that an orphan and thief, Sarah (played by the confusingly attractive Tatiana Maslany) witnesses the suicide of a woman who looks exactly like her. This gives Sarah the not entirely unreasonable idea of faking her own death, using the dead woman's body, as a way of stealing all of the woman's money. Once Sarah, in her new identity, convinces the authorities that the dead woman is actually herself, it gets Sarah out of all the debt she’s accumulated. This would be all fine and dandy, but the life she’s jumped into is a very complicated and dangerous one. And then it just gets weirder.

The thing that makes this story so much fun to watch is that we, the audience, are like Sarah, imposters jumping into the lives of a dangerous and mysterious clone (maybe?). And as she discovers further challenges and conspiracies, we discover them with her. To Manson's credit, every solution she comes up with is just the right amount of clever to make us sympathize with her, without being absurd and unrealistic. In a lot of ways this pilot reminds me of Cinemax’s Banshee, another show about an imposter, but where Banshee just burned through the plot in order to get to the Amish blowjob tooth-pulling stuff, Orphan Black takes its sweet time, going through every little harrowing detail (there is a particularly crushing scene involving Sarah’s daughter and Sarah’s own fake funeral).

But, the thing that makes me most excited to come back to this show next week is that it has proven itself to be truly unpredictable. Because every scene is dominated by the human will, and not a grand theme or week by week plot arc, it is a truly volatile show, as volatile as the human condition and just as captivating.