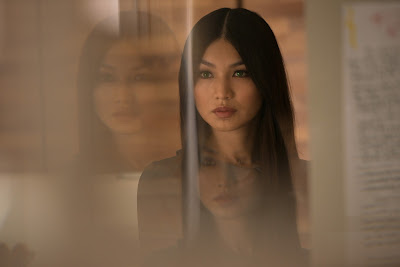 The most important piece of advice I've ever received, when it comes to telling story is this: Get to it. Don't futz around. Don't dwell on your themes or your social commentary. If you got a story, whip it out, let's see it. If you have a journey planned, I better be on the road by the time Episode One ends. In fact, I better have already made my first pit stop for snacks and a toilet.

I will admit that Humans is not a perfect show, but it certainly gets to it, right quick.

Humans is a show about robots. It is set in an alternate reality where robots are so advanced that they can perfectly copy humans. They lack original thought or sentience (some exceptions may apply), but they are capable enough to have replaced humans in most manual labor jobs. The show follows several characters over several different points in time. The main character, Anita, is a nanny-bot seeming to develop sentience. But the show doesn't linger on the mystery of whether or not she can think for very long. Instead, it jumps into the past where she and a few other robots are on the run.

Escaping from linear storytelling is just about the best choice the show makes. Instead of getting bogged down in any one stage in this journey, we get the best of all worlds. We see Anita beginning to develop sentience in a domestic scenario. We see how the various members of the family react to her. But just when the show starts to circle the drain, we jump to a high stakes fugitive plot, with plenty of seedy underbelly. And, just when that gets a little pointless, we get a side story of a man who can't say goodbye to his out-of-date robot, because it is the last vestige of the old man's dead wife. And, by jumping around, the show allows the audience to ruminate on grander themes, to read between the lines.

But it's not just the plot that kicks in at high gear. The show wastes no time showing off its stylistic ace in the hole: The Uncanny Valley. This is a term that is meant to demonstrate the level of discomfort people feel when presented with things that are almost, but not exactly, lifelike. Japanese androids, the animated films of Robert Zemeckis, and Jason Derulo, all fall into this category, where by being so close to human, but not quite there, we are uncomfortable with their presence. Somehow, through computer effects, practical effects, and very good acting, this show has managed to put actual people into the Uncanny Valley. So much of the tension of the domestic scenes is created by the very presence of a woman who is not quite human. And this is why the show's name - Humans - makes sense. The whole purpose of the show is to present the audience with a human and then tell them over and over, "this is not a human." The cognitive dissonance created makes for a perpetual unease, that occasionally boils over into quasi-terror.

I should point out that Humans is not perfect. Oftentimes, this episode opts to explain a philosophical concept, rather than demonstrate it. A few early plot points are trampled during the mad dash to narrative gold. And the family doesn't stray too far from stereotype. But most TV families are boring. At least this one has a nightmare robot creepily cleaning the table while they eat.