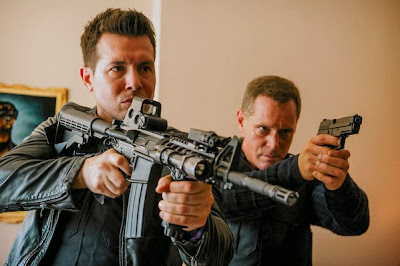 Roger Ebert once wrote, in his review for American Reunion, “If you liked the earlier films, I suppose you gotta see this one. Otherwise, I dunno.” I think, given Ebert’s history as a critic, this may be the funniest thing he ever wrote. I often think of this quote when writing reviews, this idea that, “look, if you like that kind of stuff, you’ll probably like this kind of stuff,” and even more so while watching Chicago PD. It isn’t a bad cop show or a good cop show. It is, simply, Cop Show. It uses every genre signifier in the book, (cop abuse, clearing drug dens, protocol, jurisdiction conflicts) one after another, with no breaks for air, no brief interludes of unique charm, no strange, stylistic quirks. It chugs along, presenting an unrelenting viewpoint that is sometimes hopeful, but mostly nihilistic. Everyone has this weird raspy voice (even the women). Everyone is itching for a fight, ready to steal from the till, eager to do bad, eager to do good. Chicago PD presents the police force as a sort of foul machine that is not self-aware. It simply runs, chewing up and spitting out all in its path, fulfilling its mandate with no pause for consideration or respite.

The main characters of the show are lifted from Chicago Fire, another strangely vacant genre piece from Dick Wolf. But where Chicago Fire was about the most neutral good guys you’ll ever meet, Chicago PD is about the most neutral villains you’ll ever meet. And they are truly villains, all of them. Their conflicts with each other are not about right and wrong. These are conflicts of pure self-interest. These lousy people hunt down an even more despicable cartel enforcer who likes beheading drug dealers in their homes, so, naturally, they want to arrest him. Of course, the main characters of the show seem inches away from beheading drug dealers themselves, so you don’t really feel the vindication. And to add to it all, it appears the main character is, himself, trafficking drugs.

In the end, I walk away feeling like no one actually wrote this pilot. It was assembled. It was assembled with care, sometimes with considerable skill, but I detect no real passion, or life.