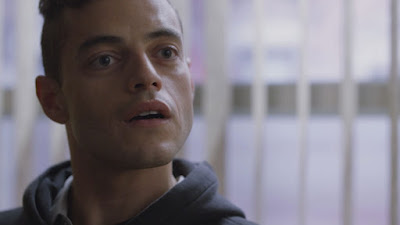 What is the primary function of a first chapter? I've been thinking about this a lot. Whether it be TV, comics, books, or whatever kind of story you are telling, what must your introduction accomplish, to be successful? I've read a lot of ideas on the subject. I've heard the first chapter's function is to bring the audience into the world, introduce the characters and themes, or establish the story's hook. But for every proposed purpose, there is a counter example. There is only one function that every good Chapter One must accomplish, from which all other qualities derive. It is this: Chapter One must make you want to read/watch Chapter Two.

I lay all this out because, while Mr. Robot has many merits, the pilot doesn't make me want to watch Episode Two. And that's a shame because this is a good episode.

Mr. Robot is a show that is not actually about a robot. It's about a young man named Elliot (Rami Malek) with exceptional computer skills and very poor personal skills. Elliot is a cyber security specialist by day and a hacker vigilante by night. He finds people who he suspects of being wicked in some way, invades their cyber life and eventually either blackmails them or just turns them in to the authorities. He also clearly has a host of mental disabilities including, but not limited to, Social Anxiety, Delusions, Autism, and Depression. He then meets the eponymous "Mr. Robot" who is actually just Christian Slater. "Mr. Robot" brings Elliot into a ragtag group of hackers bent on crushing the world's largest corporate conglomerate, which is actually called Evil Corp (not kidding). Elliot agrees to take on the fight because of course he would, being that he is a disenfranchised hacker, and in the end, the battle begins.

That's about it. The good guys and bad guys are established. The world is established -  a deeply subjective world, as it seems we are seeing it through the eyes of our delusional hero. And the hook - the most accurate portrayal of computer hacking to ever grace the small screen - is thoroughly established.

But there are fundamental cracks in all these ideas that undermine the exceptional tone and thoughtfulness of this episode. As for the characters, Malek is a gem who manages to thoroughly captivate us from the second he appears on screen. But Slater is not really the best foil. He's supposed to be a charismatic leader, but he comes across as smarmy, and little else.

The idea of a world seen through the eyes of a conspiracy nut is interesting, but also really boring. The show is chock full of tirades against the modern world that lack the eloquence and passion of say, Do the Right Thing or The Social Network. These tirades wind up feeling more like a checklist of things young disenfranchised people might hate.

And then there's the hook: the hacking. I am pleased that we've moved beyond the game of Snood that used to pass for hacking in fiction, but this show still fumbles trying to find how best to mine drama from computer hacking. One scene in particular in Mr. Robot puts Elliot in a server room, frantically trying to switch to a backup server before the primary cuts out. This scene is punctuated with lines of code and a blinking circle. No amount of dramatic music is ever going to make this scene anything but a guy on a laptop typing while a circle on a monitor blinks. It's just not very dramatic. No one's life is in danger. The stakes are abstract, ethereal. Other scenes use hacking more effectively, as a way to search and snoop. A fact-finding scene, or even a world-establishing scene. But with most of the high points of the story being computer related, the show winds up stuck with limited stakes. I'm not sure what will happen if our hero fails, and I'm not sure I care.

It should be mentioned that this is a USA show, and it is a massive step in a new direction for the blue skies network. The show is brooding and thoughtful in a way that's not entirely annoying. There is lots of sex and drugs and other things that would upset people looking for reruns of Burn Notice. But in other ways, the show stays true to its USA roots. Slater at one point says that the best way to take down Evil Corp is one executive at a time, outlining the show's procedural hook. Every episode we'll be taking down another Wall Street villain. It's pure fantasy, and I'm not sure if the show is willing to engage with the realities of what they are doing. I doubt we'll ever get a shot of the mean executive they framed, in prison, weeping, alone in the dark, with only the fading memories of his children's faces to keep him comfort.

I'm not sure how to give a letter grade to this episode as it was very entertaining, yet I doubt I'll ever watch Episode Two. It failed as a pilot, but it succeeded as a brief venture into the world of cyber warfare and crushing loneliness.