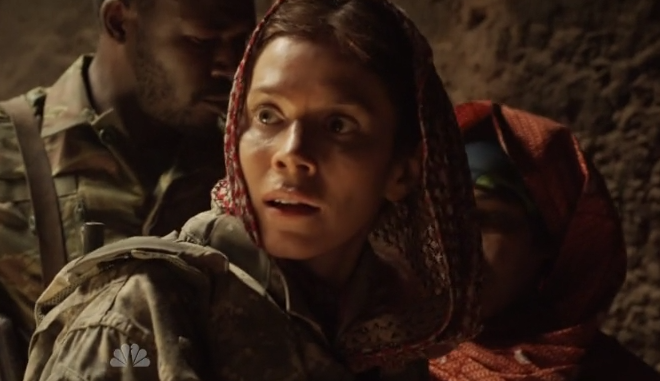 Before I get into this review, I must mention that Anna Friel makes any chance of a neutral, objective review completely hopeless. When I see her face, my critical brain shuts off. It's not that she's sexy or provocative. She's attractive, in a gravitational sense. She absorbs. She captivates. She is the jailer of my solitary focus. I am not watching a TV show when she appears on screen. I am eating a feast.

So, today, I'll be doing my best to review the parts of this pilot that do not feature Anna Friel. American Odyssey has several interweaving plot lines having to do with terrorism, business, information, all glossed over with a heavy coat of conspiracy. When an American Special Forces team find and kill a famous terrorist leader, they happen upon some information that seriously incriminates a U.S. company. They are promptly wiped out by a private military outfit. All except the Special Forces translator, played by Friel, who then attempts to make her way home in a hostile land. Along the way, she makes expressions with her face that make me feel like my insides are turning into warm tea...

Anyway, across the globe, the show's other, less delirium-inducing characters  are a collection of lame stereotypes. A bumbling nerd hacker who lives with his mom. A rich Lawyer struggling with his conscience. An Occupy Wall Street protester in a fashionable hat who talks like a protester who has been asleep since 1969. I don't like any of these characters very much. And what's troubling is that the show doesn't seem to like them much either. When the Occupy Wall Street kid comes home with a girl who says she's a reporter for Time Magazine, the show cuts to ominous shots of her looking suspicious. There's no ambiguity here. She's a fucking spy. You know it, he doesn't. This just makes him look like an idiot.

By the end of the episode, the writers spill the beans on the whole conspiracy. You know who the bad guys are and why they are doing what they are doing. There's no mystery any more and there are eight more episodes.

The filmmakers behind this episode are crafting a reverse magic trick, where you see all the strings and mirrors, and the characters in the show play the confused audience. But, much like standing back stage during a magic show, it's not very entertaining.

All in all, I can't say this is a good show. I can say, for sure, that I will watch every episode. Because they have not yet invented drugs as powerful as watching Anna Friel act.