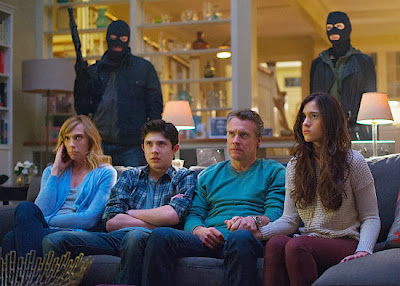 This show has a really interesting concept ruined by poor plotting and lazy character work. The family of a surgeon, Ellen Sanders (Toni Collette), is held hostage by an ex-hostage negotiator, Duncan Carlisle (Dylan McDermott), until the surgeon kills the President of the United States. This show sits on its concept in the same way a fat clown sits on an Edvard Munch painting. Every opportunity for tension and subtlety is buried under characters that appear to be pulled from completely different shows. Instead of showing how a normal family confronts such terror, we have the son dealing drugs, the dad cheating, and the daughter seeing the standard dangerous boyfriend. But all these character details seem so inconsequential given the fact that men in ski masks are putting guns to their heads. Yet, down the line, I’m sure we’ll see these subplots bubble up and run head to head with the hostage situation in ways that are, best case scenario, wacky.


The show eventually shows us its hand towards the end of the pilot. Ellen Sanders will not be so easily trapped, and she finds ways to fight back. And thus begins the battle of the wits between a brilliant surgeon and her brilliant captor that will take up the rest of season 1. This really does interest me. Of course, then there’s some big conspiracy and the President is actually evil. I’m not opposed to evil presidents and conspiracies on principal. This show could be so good if it went for some semblance of realism, and if it were about nothing more than the interactions between four captors and their four hostages – the family, living out their lives to avoid suspicion, the captors constantly managing the family. But I don’t think the writers have talent (let alone the chutzpah) to pull that off. So, they wave a bunch of standard family crisis tropes and political conspiracy tropes at you and hope you don’t notice they are squandering a goldmine.
Posted by Timothy Earle at 1:06 PM