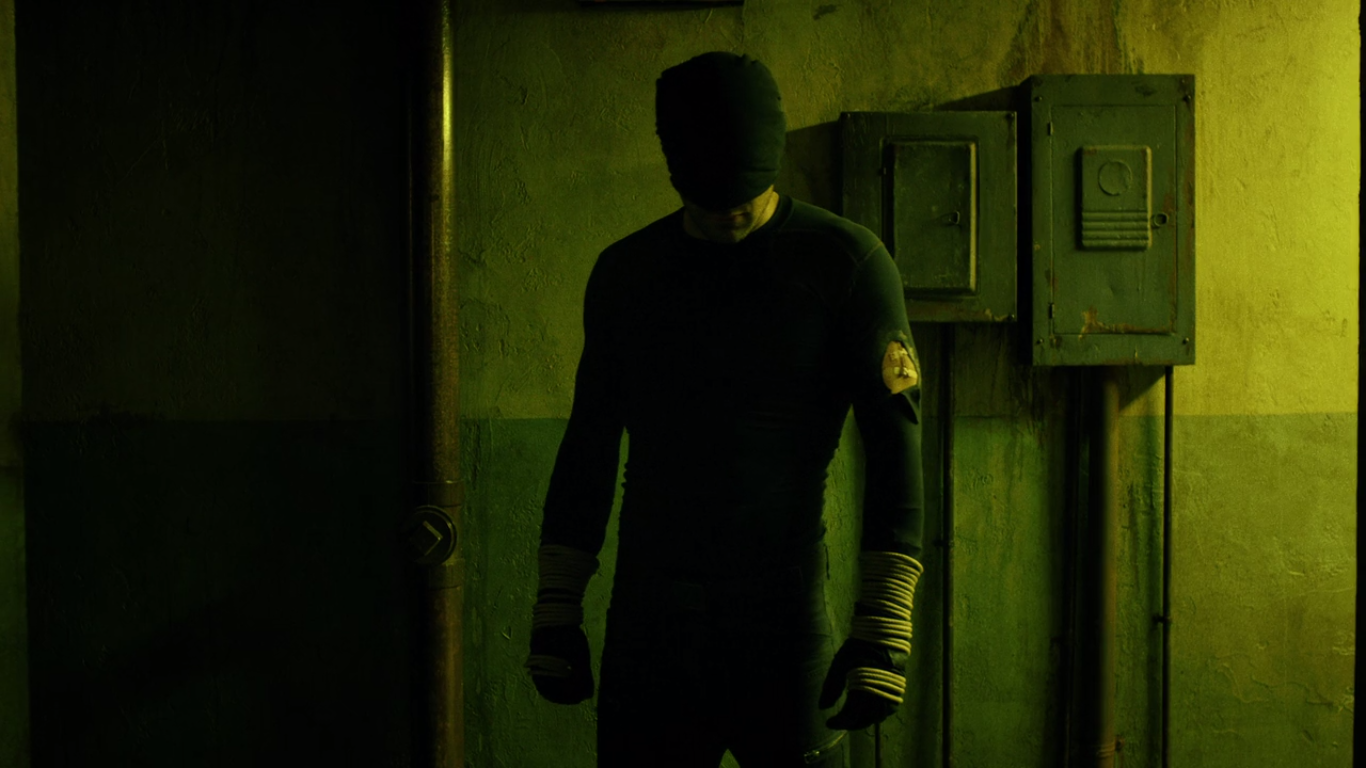 A lot of people nowadays forget that most of Shakespeare's plays - nearly all of the great ones - were adaptations. He had little interest in making his own stories from scratch. He would take old legends, old poems, old historical records, and he would insert two things: beauty and ambiguity. Take the story of Amleth, a classic story of royal betrayal and revenge that was then retold by Shakespeare as 'Hamlet,' a story of introspection and inaction. The writing is so stunningly effective, it is over-quoted, four hundred years later. Now, all of this is not to say that Daredevil is Shakespearean in quality. It isn't. I'm simply saying that there is nothing wrong with retelling old stories. But to retell a story well, you'd better insert some beauty and some ambiguity.

So we arrive at Daredevil, another phase in Marvel's campaign to dominate the world. It is a retelling of a comic book series that debuted in 1964 about Matt Murdock, a blind vigilante. As a child Matt is blinded by some radioactive chemical which gives him supernatural hearing and olfaction. By day he is a lawyer and by night a crime-fighter. The first two episodes do little to establish his impetus for crime fighting (though it's not hard to guess). Instead they focus more on what happens after he decides to put on a mask. From this point, we meet the allies he makes - a new assistant for his law firm, and a street-wise nurse for his crime fighting - as well as the bad guys he will face as the show progresses - a murky establishment of criminals and business men. It's all lifted pretty faithfully from the comic. So, how does it fare as an adaptation? We'll give it the Shakespeare approach and talk about beauty and ambiguity.

When it comes to beauty, the show really knocks it out of the park. I was initially skeptical about Daredevil. It was being pitched as "gritty" which, these days, means "monochromatic and humorless." And I didn't think I could stand to watch a 13-episode series with the color pallet of a high school cafeteria. Luckily, the show has a lot more to offer in terms of visuals. For example: 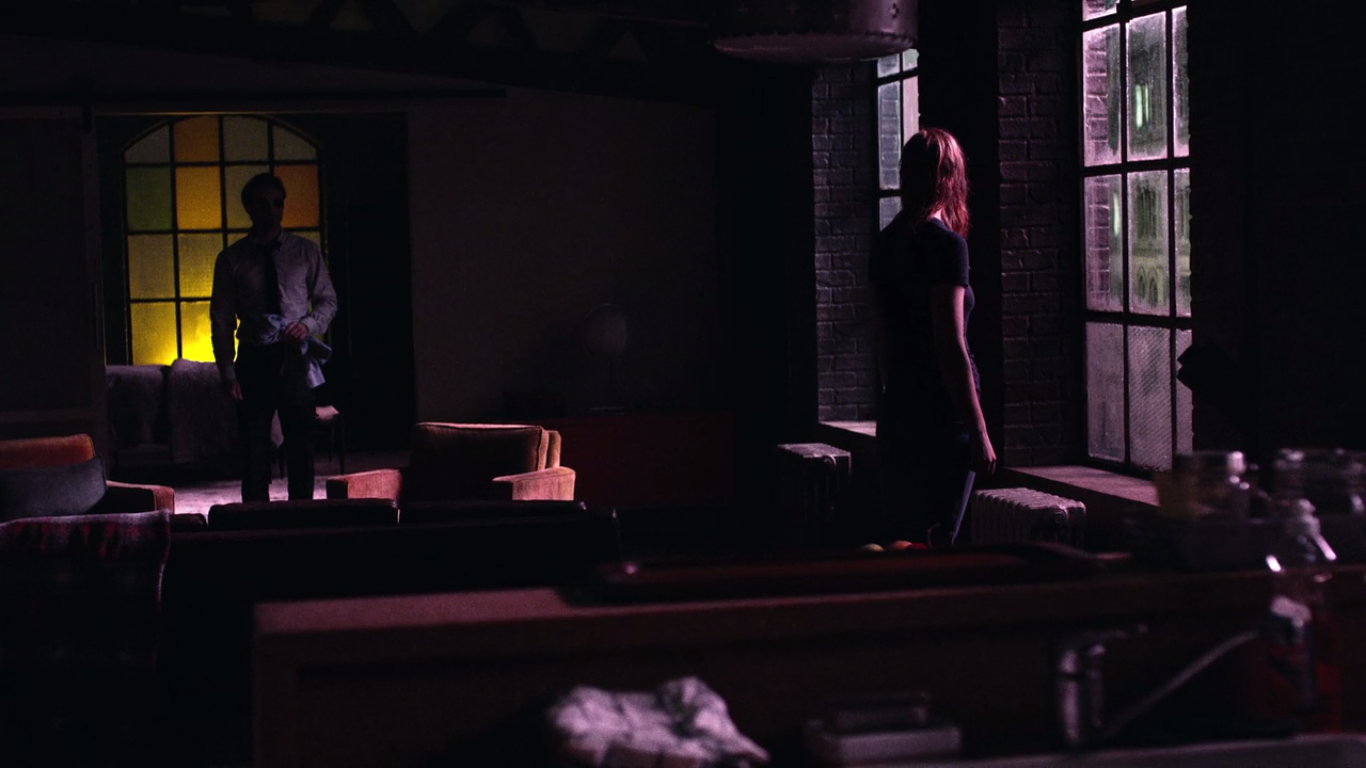 In Daredevil, windows tell the story. Scenes are usually set in front of large windows. These windows tell you something about the character standing before them. For example, Matt Murdock, the blind vigilante, never sees whats outside the window, so neither do we. He is lit by stained glass which obscures the details, but still provides the putrid yellows and sickly greens coming from outside, symbolizing the danger and horror of the city.

When Daredevil launches into its action scenes, it aims to impress in a way that is rare for TV. The fights are frenetic and thrilling, occasionally slowing down to give you a glimpse of how a blind man fights. I was most impressed with how painful every fight looked.

But, while it nails beauty, when it comes to ambiguity, the show falls short.

In the second episode, Claire Temple (Rosario Dawson) is introduced as a moral observer to Matt Murdock's crime fighting ways. She is aware of his actions, and understands the positive outcomes, but she also calls into question his unethical methods. This kind of character is really important to thoughtful art, as you never want your audience to be trapped by the world view of your main character, especially when his world view is a little skewed. So she adds a dissenting voice. But, sadly, as the episode goes on, she eventually puts her morals aside and joins in on torturing a bad guy. This is a shame as she could have infused the episode with a lot of ethical complexity.

Matt Murdock is perfect as an ambiguous super hero. Throughout the show, the bad guys aren't always street thugs. Some of them are cops, or businessmen in suits. But, like lady justice, Murdock is blind, judging you for your actions only. Sadly, the show doesn't fully capitalize on this. None of the cops in the show are actually bad. They are either crooks pretending to be cops, or a cop forced to do bad stuff to save someone else.

In spite of its shortcomings, Daredevil is ambitious in a way that other Marvel shows aren't. While Captain America fights for the fate of the world, Matt Murdock is knocking out a fat guy in a recliner. Daredevil knows there are aliens and gods fighting above us, but Daredevil doesn't care. It may not be Hamlet, but above all else: it is true to itself.