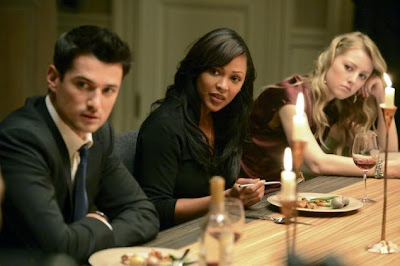 Watching this pilot was like going to a baby's funeral. It was dead before it had the chance to do anything remarkable. But the potential was there. The concept is strong. Riding on the coattails of recent shows like The Killing and Revenge, Deception goes for the long game. Setting up a premise that feels more like a film than a movie. An undercover cop integrates with the insanely rich family of her recently murdered best friend to try and figure out which of them is the culprit. It's the kind of slow boil TV that could yield some really interesting long term results. Of course in the case of Deception they seem to be more interested in instant gratification, giving you murder! And love triangles! And shouting! Lots of shouting!

The mystery of the show is actually quite compelling. Spending a whole season (possibly more) with a family of characters and trying to determine which one is the killer. Given some subtle character development, this is the type of water cooler show that could really gain traction. Unfortunately, we get character development in the form of cringe worthy lines like "You drink!" "You do coke!" "You have attitude!" "I don't trust you!" Every character gets boiled down to their most basic cliches, from "drunk mom," to "obviously murdered someone."

It's a shame that with some more graceful writers this show could have become something really engrossing. As it stands, I honestly don't even care at all who the killer is. I don't care that whatshername died, and I don't care about these cardboard-cutout people's lives. I hope they all die, then are brought back to life, then die again. That would at least make for interesting television.
Posted by Timothy Earle at 12:36 PM