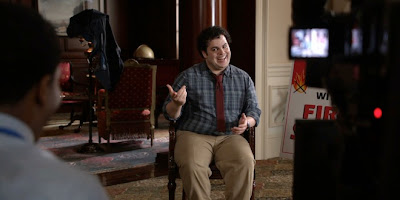 Back in 2001, Matt Stone and Trey Parker made a show called That's My Bush. It was a standard multi-cam sitcom loaded with canned laughter that just happened to be about the George W. Bush White House. It was hilarious. I suggest you watch it. The thing that made That's My Bush work so well was that it juxtaposed the stale sitcom format with the current White House, a place usually regarded with reverence and awe. The result was perfect, as each character was transformed from who they actually were in real life to their sitcom persona. The mother knows best wife, the well-meaning but always bumbling husband, the wise cracking Karl Rove. Never during the show was there even the slightest hint of veracity. It took place in the sitcom universe and all was well (not to mention utterly absurd).

So here we are, more than ten years later, and NBC seems to be blowing the dust off pilot scripts written for another generation. Their latest outdated attempt at finding their audience is the show 1600 Penn, a show about a fictional White House dealing with their prodigal idiot son. The biggest problem with the show is that the son isn't funny at all. In fact, he tends to suck the humor out of many otherwise funny scenes. The second biggest problem with the show is that it lacks the distinct separation between the fictional universe of sitcoms and the real world. 1600 Penn wants to have its wacky sitcom antics while, at the same time, wanting you to believe this is the actual White House.

In many ways, what's wrong with this show is that it isn't aware that it's a lame sitcom. The only quality sitcoms these days are looking at the camera, they're acknowledging their own storytelling methods. It's tough to make a straight-faced sitcom these days and hope its fresh blend of heart and laughs will make you stand out. It's a thing of the past. It's fitting that the pilot episode ends with the characters sitting around watching a very real life Jay Leno, lampooning the fictional White House family. A family living in an outdated sitcom watching an outdated talk show host make some not very funny jokes...
Posted by Timothy Earle at 3:40 PM