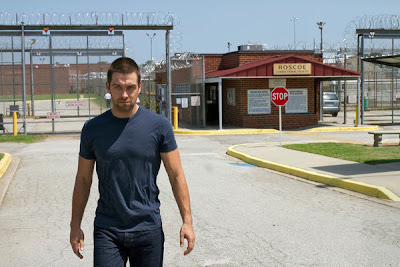 Have you ever wanted to see a man murdered with a bottle of A1 Steak Sauce? Ever wanted to see someone try to outrun a tour bus? Have you, perchance, any interest in watching a man pull teeth out of his knuckles while receiving sexual favors from a girl wearing an Amish hat? The fact is, I want to see all those things. So why didn’t I like Banshee, the newest TV show from Hollywood’s paladin of overstatement, Alan Ball? The performances were solid, the premise was fun, the pace was electric. Just watching Antony Starr walk from one place to another was feverishly entertaining, reminiscent of a younger, shorter Lee Marvin. The show moved with fierce determination, right up until the story kicked in.

Banshee is about a bad-boy ex-con (appropriately unnamed) who gets out of prison, 15 years after a job gone wrong, and puts down stakes in the town of Banshee - as their sheriff. The potential for pulpy fun would have been limitless, yet one important factor was left out: motivation. The fact is that while I really enjoyed watching the hero impersonating a sheriff, I saw no reason for him to do it, and it was dumb. It didn’t seem to get him anything, aside from a lot of trouble. Of course, if our hero had decided not to do something so incredibly stupid, there would be no show, but that doesn’t make it any less stupid. In every scene, I couldn't help thinking, “You know, this problem could be solved by simply not pretending to be a sheriff.”

A part of me feels that that maybe I should allow the show a few gimmes, let them have their premise and see what fun places they take us. But a part of me worries that maybe the whole show will be this: All the right ingredients, but in the wrong context, like a trashcan full of cake.
Posted by Timothy Earle at 7:13 PM