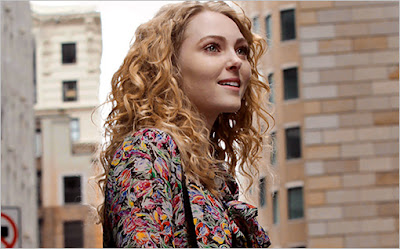 Who the hell is AnnaSophia Robb and where has she been all my life? I’ll talk about the CW’s new The Carrie Diaries pilot in a moment, but first, Annasophia Robb is amazing. She manages to convey both the youthful innocence of high school and the spirit of a girl who’s grown up too fast. She has been given some ridiculous things to do and say in this pilot, but she pulls them off marvelously, never going for either the cheap laugh or the overly serious interpretation. Not only that, but she manages to – while looking nothing at all like a young Sarah Jessica Parker – seem like a young Sarah Jessica Parker. She gives an incredibly confident performance.

As for setting the show in the 1980s, it’s necessary given that it’s a prequel. And while the benefits of the setting are obvious in the score (keep your ears peeled for a hysterically mellow cover of “Girls Just Want to Have Fun”), sometimes I felt like the show was simply dressing up in '80s clothes rather than actually transporting me to another decade.

At the same time, does a modern teen drama need to reminisce on a time when most teens these days were not alive? I’d say no. Instead, they opted for a more modern style of storytelling with just a faint whiff of nostalgia for the older viewers. The result: yet another lukewarm teen drama only slightly elevated by the chops of its leading lady.