Today I would like to talk about two pilots. Neither of them perfect, both of them interesting.

The comedy world is moving in an interesting direction. Because of the efforts of Larry David, Louis C.K., and Lena Dunham, comedians are starting to get more credibility. Sitcoms are now being seen as art, even literary. Critics across the board are looking at sitcoms in a new light, and studio executives are catching on. They're taking risks and no longer looking for someone to squeeze jokes in between the laugh tracks. They're looking for established artists, with fully realized voices, distinct styles, who want to change the face of entertainment.

Neither of these shows have those artists. They're both knock offs of better shows, done with varying success. We'll start with The Kroll Show. 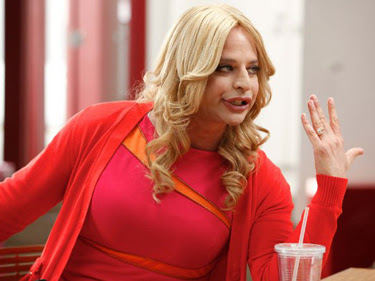 The Kroll Show is awful. It starts with uninspired, recycled stand up, delivered Woody Allen style to the camera and is followed by twenty minutes of stale jokes, bad impersonations, and toothless parodies of things no one cares about. There's a reality show about PR girls done bravo style, a Degrasse style segment consisting of almost entirely lame Canada jokes, and a three-years-too-late Sex and the City for Men segment. Everything about the show seems completely half-baked and it's about as relevant as my asshole is to this sentence. But, about halfway through the episode I started noticing something. The editing was so abrupt, everything seemed so awkward, I started noticing a kind of intentional awfulness that I wasn't totally sure how to digest. It began to remind me of a far superior show, Tim and Eric Awesome Show, Great Job!. Characters seemed to intentionally flub lines, or a title card would come out of nowhere, a dozen times. It became clear that there was an absurdest at the wheel and he was steering the ship into strange waters. When it was over I wasn't entertained or even remotely happy, but I didn't feel totally robbed of my twenty two minutes. I felt I'd seen someone try to do something interesting, not new, but at least not that old. 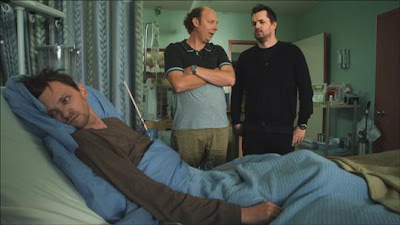 Then there's Legit. The pilot follows Jim Jefferies (playing himself), an unrepentant asshole, who goes to visit his mate's dying, paralyzed brother. The brother insists that he wants to lose his virginity before he dies, so they all head off to Nevada to get themselves a hooker. It's here that the story takes a strange twist. It becomes incredibly sweet. The experience is awkward, and silly, and a little gross, but more than anything else, it's just very very sweet. Jefferies is, for the most part, pulling a Louis C.K., or a Larry David, making a show about himself, blurring the line between reality and fiction. Making it personal. Nothing he's doing is particularly radical, but the episode left me in a very good mood, which is more than I can say for Mr. Kroll.

Not every show can be a radical. They can't all push the boundaries or else we'd have no idea where the boundaries are. But The Kroll Show and Legit both satisfied me in that, if you're going to be a carbon copy, at least try to emulate something fresh, something new. Acknowledge that we have a rich history of traditional humor and formulaic sitcoms and then don't care, make something that you like. If you like Louie, then make that. At least you have good taste. At least your not Whitney Cummings.
Posted by Timothy Earle at 2:00 AM