A Guide to Watching CBS’s Elementary 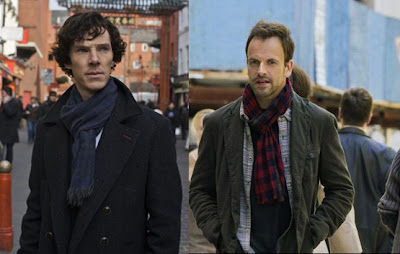 I am a fan of the BBC’s Sherlock. I think it’s got some marvelous acting, good writing, and is a step in the right direction for television in general. When I discovered that there would be another Sherlock Holmes TV show coming to America, and that it would air on CBS of all networks, I was ready to cry because, like every other pilot over the last two years, I would have to watch it. So I begrudgingly watched the manic Johnny Lee Miller and excruciatingly attractive Lucy Liu prance about in their roles. Each of them added a modern flair, but nothing I hadn't seen in the BBC version – Sherlock being glued to his smart phone, his fast walking and eccentric dressing, even the penchant for scarves and pea coats. I kept yelling at the screen “The BBC already did that!” and when the show managed to come up with some original things (such as having Watson as someone hired to keep him sober) I snorted and assumed CBS would find a way to make it awful, because they make Two and a Half Men and I hate them. But then, last night, something occurred to me. Not only is Elementary a very good show, but every Sherlock fan should be watching it.

There are three steps to getting past your snooty Brit-loving hatred of Elementary. The first is to remember that Sherlock wasn't that original to begin with. TV shows about eccentric and troubled geniuses are a dime a dozen. Some could argue the Fox’s House MD was actually the first major Sherlock Holmes remake of TV’s golden age and that Sherlock is just copying its style. In a lot of ways, I’d say Elementary is borrowing just as much from CBS’s own The Mentalist as it is from Sherlock. So there’s no way that Elementary is simply copying Sherlock or even that the Americans are copying the Brits. But, in fact, we’re all just remaking the same story.

But even with the copycat arguments neatly shelved, we are still confronted with a conundrum: Do we need yet another goddamned story about a troubled genius who solves things. My answer is a solid “Yes!” These stories have existed for centuries because they are lovely and we always need them. In a lot of ways, Sherlock, in his many forms, is our guardian angel, unattached to society or fads, distinctly moral, brilliant, yet always an outsider. He rights wrongs and is ever watchful. Whether it’s Patrick Jane, Sherlock Holmes, or even Doctor Who, we, as a species, need stories of brilliant and kind guardian angels who don’t totally fit in. The more the merrier, I say. Whether you want to make that guardian angel a depressed, revenge filled ex-psychic, or an alien from outer space, a psychopath or a drug addict, that's fine. All of those characterizations yield interesting and limitless stories. No matter how you use the same rubric, you get an interesting tale.

Lastly, for those of you not yet convinced, I would argue that Elementary shouldn’t been seen as a usurper or as a cheap imitation. It’s a companion piece. Forget for a moment that Johnny Lee Miller looks nothing like Benedict Cumberbatch and imagine that these are, in fact, the same story. One is about a genius in England who rose too high and then fell (see what I did there), while the other takes place later, in America, and is about his recovery. In Sherlock, his relationship with an ex-army doctor/blogger makes him into a more violent and publicly involved individual, while in Elementary his relationship with a sponsor makes him a little more introverted and soft. If you look at it that way, the two Sherlocks fit together, like a before and after picture.

I think, with these tips in mind, any ardent fan of BBC’s Sherlock will surely find something to love in Elementary. Even if you are only into Sherlock for Cumberbatch’s delightful cheekbones, I say check out Lucy Liu's . 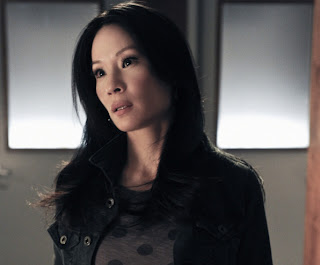 This picture alone should give you reason enough to watch Elementary.

Posted by Timothy Earle at 1:31 PM