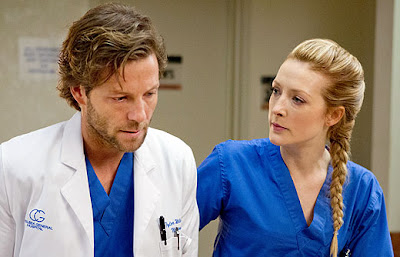 If sexy doctors are your thing, TNT has a treat for you. Jamie Bamber’s puppy-dog eyes and masculine-yet-never-threatening good looks are sure to cause dangerous levels of swooning. But beyond Bamber’s smoldering yet boyish visage, I’m not really sure what the point of this pilot is.

Monday Mornings is about the the daily challenges faced by surgeons in a fictional Portland hospital - including an oddly avant-garde, public shaming ritual in a setting which looks an awful lot like a black box theater (possibly to make Alfred Molina feel more at home). Unfortunately, the trials and tribulations of generic surgeons in a generic hospital constitute some of the most exhausted clichés of all time. There is literally nothing new here - no spin, no twist.

Sometimes, well-trodden ground can be made fresh by skill and innovation. But there is nothing innovative about Monday Mornings. The characters vary from tired archetypes to bizarre parodies. The tone is all over the place, dipping into fast-paced, blood-spattered thrills, followed by slow oppressive drama before moseying into quirky ethnic comedy. For some reason there are a lot of over-the-top accents and, oh right, Ving Rhames, who doesn’t seem to be playing any particular role beyond “Ving Rhames wearing scrubs, occasionally heckling the other actors.” Lines like “We have to stop the bleeding,” and “Call it,” have me checking my watch wondering when I can declare this show officially dead.

Bill D’Elia is a competent director but he is stretching to make something unique out of this by-the-book drama. In his mad attempts at making something not wholly derivative, he winds up making an even bigger mess. Practically every shot in the pilot defies convention, in a loud, distracting way. It's as if D’Elia is trying to drown out my boredom by giving me a headache.

I don’t mean to say that there’s no such thing as good genre TV. But, honestly, I think David E. Kelly is just worn out after dozens of courtroom and medical dramas, and at this point he’s just regurgitating whatever leftover scenes he forgot to put in Chicago Hope or Doogie Howser.