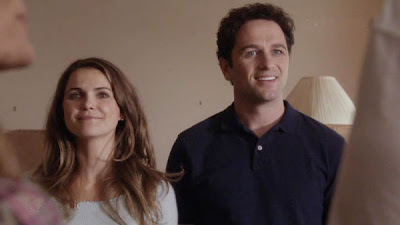 Early on in this pilot, there’s a fast-paced, nail-biter of a chase scene. The scene is well executed but fairly standard spy thriller stuff. Except, playing over all of it is “Tusk” by Fleetwood Mac. It’s a playful song with a bouncing baseline, triumphant horn section, and a tribal, dancing-naked-on-the-beach drum beat. At first, I was a little confused. The song seemed so very out of place amidst this dark, brutal action scene. But, as the scene went on, the drum beat kept hammering away, I realized that The Americans isn’t going for dour and brutal, or even slick and sexy. The Americans is here to have fun. And I love it.

It would be so easy in a show about KGB spies pretending to be a suburban family in America to become a pretty heavy drama, one loaded with cynicism and crushing despair, but Joseph Weisberg and his writing team seem uninterested in America’s new obsession with dark, brooding TV. That bouncing, energetic mood they establish early on never relents. Fleetwood Mac’s raucous energy guides the episode through some heavy subject material. There’s deceit, murder, and sexual abuse, yet the show isn’t about misery. It’s about a family. A strangely loving family.

It’s not a simple task to get the audience to sympathize with cold-blooded killer spies from Russia (even if one of them is played by Keri Russell), but the show employs a fairly genius shortcut to quickly put the audience firmly on the side of this unorthodox family: Love. As long as we believe there is love between the members of this family, we inherently want them to succeed. This is where Matthew Rhys as Keri’s KGB hubby comes in. Rhys may be the ultimate spy, complete with chameleon-like disguises and ruthless combat techniques, but he’s also incredibly devoted and loving. It’s a tricky balancing act that could easily seem campy and stupid, but doesn't. He manages to be both an embarrassing suburban dad and a super spy.

And that’s really what the show boils down to. Can you be both a devoted husband and father, while also being a ruthless spy? Can you cultivate a marriage built entirely on deceit? A show about whether or not 1980s KGB spies could bring down America would be boring. We know they would fail. But, a show about a family trying to hold itself together under the weight of spy craft, politics, and the 1980s, is a whole other story. One that could go anywhere. And if they keep this playful, dancing-naked-on-the-beach energy going, this could easily become the best show on television.