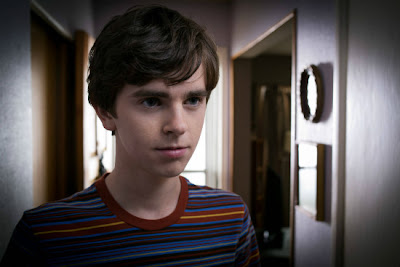 What is the point of a prequel? It’s something I’ve been asking myself a lot these days, what with The Carrie Diaries and The Hobbit. I understand remakes. I understand the thought process behind “Hey, I like the idea behind that film but think I can do it better.” It takes balls, but sometimes you’re right and you can make it better. But a prequel, especially when it’s made so long after the original, lacks the courage of a remake. It’s as if the writers of Bates Motel are too scared to try to do what Psycho did, so instead they’re just hanging out at all the same parties as Psycho and hitting on Psycho’s ex-girlfriends.

I’ll start with the high school. For whatever reason, this high school seems to be filled with women. Like, far more women than men. And on top of that they all seem to immediately befriend this new, very awkward, young man. It seems every single woman who sees Norman immediately starts flirting with him. I remember high school pretty vividly, and the weird kid named Norman was not surrounded by six or seven hot girls at all times. On top of that, all these girls seemed to lack any real character besides “Hot girl who’s into you,” “Hot teacher who’s into you,” and “Hot girl with crippling disease who’s into you.”

Then there’s the mother’s plot-line with the comically disgruntled ex-motel owner. I liked his initial introduction as the crazy guy who warns of dark times to come, but let’s just say his role in causing these dark times is utterly silly.

One thing I’ll say in favor of the show is that there’s serious chemistry between Norman and his mother. And it’s clear that the creators of the show have a deep appreciation for Psycho. There are a number of shots pulled right from Psycho, not to mention a pretty terrific “Ree Ree Ree” moment. I really felt the love the writers of Bates Motel felt for Hitchcock's masterpiece, while at the same time feeling they were basically pissing on Psycho's corpse.