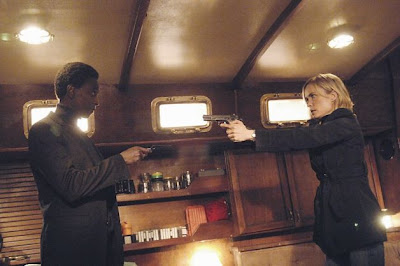 Watching the first half of the Red Widow two-hour series premiere was a truly harrowing experience. I actually stabbed myself in the leg at one point to make sure I was still alive and not trapped in some hell dimension where I have to watch lifeless pilots for all eternity. Luckily, the second half wasn't horrible. But it couldn't really make up for how much a waste of time the first hour was.

If your show is about a widow (Radha Mitchell) who inherits her late husband's debt to the mob, then fucking do that in your pilot! Don't do anything else! This pilot spends so much time on tangential side-plots and convoluted world building that it barely has any time to set up the show's central premise. When we meet the main villain, the plot finally picks up momentum, but at that point I've already sat through an hour of pointless side plots, from the main character's sister's wedding, to her kid bringing a gun to school. What do any of these plots have to do with the core concept? Nothing at all.

Any of the many plots in this pilot would have been great B plots in later episodes, once we've gotten to know these characters, but in the meantime they mean nothing. They have no dramatic relevance because I don't know who these people are. I frequently noticed the writer attempting to create some thematic tie-ins for her various subplots. But using a child bringing a gun to school to illustrate the negative consequences of your dad being a mobster is a waste of screen time. We all know the mob is bad. We don't need that explained to us.

The second half of the pilot, thank god, focuses on the actual plot. We see Radha start to pick up the various pieces of her husband's life. Taking on his work and, more importantly, mob responsibilities. We start to get a vague idea of what she might bring to the table as a mobster, solving situations with finesse instead of blunt force. And while the mistakes of the first half are quietly swept under the rug, the bitter after-taste remains. I still have no real clue why a mob boss wants her to take on her husband's responsibilities in the first place. She has no real skills that would make her a successful criminal. I assume the show plans on having her grow into a mobster, becoming harder and more cunning, but this doesn't change the fact that there appears to be no reason at all for her to have been chosen in the first place.

It is this reviewer's opinion that a pilot need only answer two questions: "Who?" and "Why?" Who are your characters, and why is this your story? Everything else can wait. As long as you have compelling characters and a unique perspective, I'll come back for more. Red Widow spends 90% of its precious time letting us know who every side character is, in great detail. But when it comes to explaining why anything is actually happening, the answer is more or less "Because we said so."

As a final note, I'd like to point out that some of my favorite episodes of TV, like Firefly's "Trash," or The West Wing's "In the Shadow of Two Gun Men," or almost any episode of Lost's first season, are ones in which the writers give us the back stories of our characters, telling us how they have come together. The reason these episodes are so terrific is that we get to know these characters in action, as fully formed people who we can relate to, before seeing their formative years. But if any of these flashback episodes had been the pilot, they would have been terrible. Without the context of what these characters will become, all these humble beginnings are horribly boring.