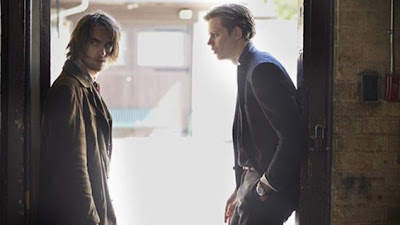 The show starts out great, a long eerie shot of Bill Skarsgard with a lopsided ice cream cone looking far more menacing than anyone with a lopsided ice cream cone has any business looking. Then, a number of other unsettling things happen until someone dies, horribly. The rest of the episode is partially devoted to the investigation into the possibly supernatural killing, but mostly devoted to wasting my fucking time.

I enjoyed the beginning, because I was getting a sense of the pace, and I was overwhelmed but entertained by all the information I wasn’t being presented with. The problem reared its hairy head after about 15 minutes when the show dropped into this stilted rhythm of constant, sloppy exposition. Every scene was so unbearably on the nose, people awkwardly shouting out their relationship to each other, clumsily stating exactly what they thought of everyone else. And the direction was so haphazard and lifeless that everyone just seemed like information robots, only there so you know what’s happening.

And the sad part is what’s happening is really cool. The characters are interesting, mysterious, and rich. The setting is bizarre and fun. The possibilities are endless, really, but for the show to work, it needs to move forward. I’ve said this before, and I’ll say it again, a pilot is no place for flashbacks. I’d love to learn about all these people’s sordid pasts, but first, I’d love to just know them.

Sometimes a pilot is a blueprint. It’s like base camp – a building block from which the show grows – but in this case, I don’t think so. Knowing that Eli Roth will no longer be inflicting his tasteless direction on us again, I think this pilot is more like losing your virginity: the first, terrible, awkward, fumbling step towards a long and enjoyable sex-life.

Article first published as TV Review: Hemlock Grove - "Jellyfish in the Sky" on Blogcritics.
Posted by Timothy Earle at 11:26 AM