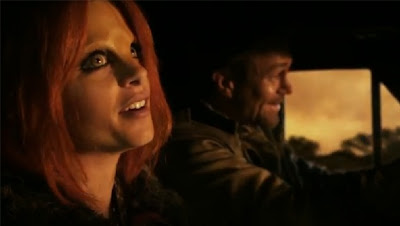 If you think Lost qualifies as hard sci-fi, you will not be a fan of Defiance. This is as hard as sci-fi gets. The advantage of hard sci-fi is that the potential for expansion is limitless. There’s nowhere it can’t go, and the writers of Defiance have proved they are willing to go there.

Defiance is, at least partially, the brain-child of Rockne S. O’Bannon, who previously created Farscape, so he’s no stranger to campy, prosthetic-heavy, sci-fi universes. And if you liked Farscape, this show is so similar, you could easily be convinced they are set in the same universe.

The show follows Nolan (Grant Bowler, who you may remember from Ugly Betty) and his adopted alien daughter, Irisa (Stephanie Leonidas, who you will not recognize at all from Mirrormask), and their role as new-comers in the town of Defiance, which was once Saint Louis. The town is populated with all sorts of strange aliens, as the world has recently become home to eight new alien species after a long bitter war. Since all of the old governments are gone, the town fends for itself, giving the show a sort of Wild West vibe. Basically anything can happen.

A clear O’Bannon fingerprint is how all the plot lines seem to fit into standard archetypes, but with a small twist. There’s a distressingly cut-and-dried Romeo and Juliet plot line - with aliens. But just when I was about to throw up my hands in disgust, the writers took R&J in a new direction, subverting expectations subtly, because we all know how Romeo and Juliet is supposed to end, and O’Bannon has no interest in giving you exactly what is supposed to happen.

In the end, a show like this always comes down to the characters. And on that score, I’d say they hit the mark half the time. The refreshingly down-to-earth deputy, the disgruntled alien doctor, and a few other minor characters kept me entertained. But, as with most O’Bannon shows (and most Syfy shows in general), the main character is a little wooden - not that it matters, because I see this show as an alien Deadwood, where the main character isn’t meant to be the center of attention, just a casual observer, guiding the audience through this strange and foreign land. What makes Defiance so compelling is that the foreign land used to be Earth.