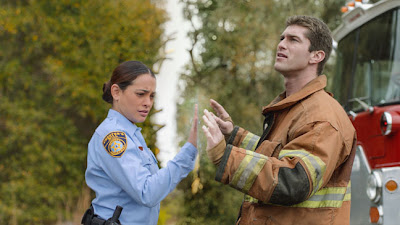 Of all the popular apocalyptic scenarios, Under the Dome might have the most terrifying. No zombies, or diseases, or demons, or body-snatchers. You are just trapped with other people. A dome plops down on your sleepy New England village and suddenly you have no contact with the outside world. Your friends and neighbors immediately become enemies the moment scarcity becomes a problem. Established roles of authority suddenly mean nothing. Everyone has got a gun (this is America after all) and there’s no calling for help. You are alone and on display. It is some pretty unsettling stuff.

Anyway, this pilot was fucking terrible. Instead of a show about how ordinary people are driven to violence and paranoia in exceptional circumstances, this is a show about a town that appears to be filled with psychotic men and dumb-as-dirt women. Because so few of the main characters even vaguely resemble real people, their responses to this new supernatural disaster are not even remotely interesting. What makes this situation potentially so terrifying and captivating is that ordinary people would be driven to extreme measures pretty damn quick. But when crazy-face knife-boyfriend locks his girlfriend in a bunker, it’s not because of the situation the town is in. It’s because he’s crazy. And a crazy guy locking his girlfriend in a bunker is just not interesting.

Even the more or less normal people in this town have totally bizarre reactions to the dome coming down. For example, everyone decides to chat with Barbie. Barbie is the nickname of a professional killer (possibly) who has just buried his latest victim in the woods and is trying to escape town when the dome comes down. And, for whatever reason, every person he runs into, from naïve farm boys to journalists to home town waitresses, can’t help but latching on to him and chatting about their lives in great detail. In the face of a horrible disaster, the last thing I would do is find someone I don’t know to hang out with, alone. I would seek out my family, my friends, and keep them close. I wouldn’t trust a guy who showed up in town just hours before the dome came down. And yet everyone here does.

Here’s the thing: I’d watch a show about ordinary people suddenly cut off from the outside world, trying desperately to survive. But this is a show about a town filled with TV characters. So, in the end, when the sheriff says, “We lost twelve of our own today,” no one seems to care much. And why should they? It is not like any real people died. There are no real people in this town.

Article first published as TV Review: ‘Under the Dome’Season 1, Episode 1 – ‘Pilot’ on Blogcritics.
Posted by Timothy Earle at 2:53 PM