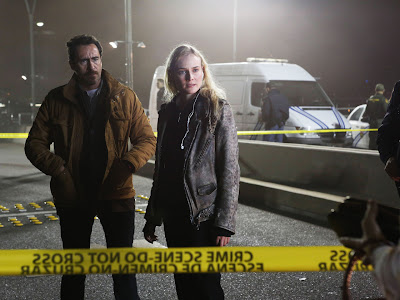 There is something vaguely autistic about the way The Bridge unfolds, which is fitting, considering the extremely autistic main character (Diane Kruger, who is excellent). I’ll explain. One half of the story is about a well intentioned yet jaded Mexican detective (played by Demian Bichir, whose capacity for subtlety is unparalleled). He is brought in on a very twisted murder case where the top half of a murdered Judge has been left attached to the bottom half of a dead Mexican girl on the Juarez-El Paso border. His every tired move fills the audience with the feeling that this is a man who’s been worn out by a life of disappointment, and this case may be his only chance to get it right. Yet he laughs and sighs with resignation, as if none of this really matters. Every single moment in his individual story line is steeped in implications and subtext.
Enter the El Paso detective (Diane Kruger), investigating her half of the murder, who tears through Demian’s perfected subtlety like she’s playing twenty questions. Every implication is made concrete by her incessant and very direct inquiries. And while it’s believable, even enjoyable, to see these two well-crafted characters tug against each other; it also flattens a show which could go so much deeper.
But it’s not just the Diane Kruger's autistic super cop who makes the show a little too on-the-nose for its own good. It’s a flaw that runs through every plot line. There’s a potential serial killer (played by Thomas M. Wright) who’s hunting down ladies in Juarez, taking off their shoes, then trapping them in the desert. His character is like a checklist of overused serial killer tropes. Then there’s some random Texan played by Annabeth Gish, who has found out after her husband’s death that he has a secret barn with a creepy secret basement crate. But nothing presented to us by these plots begs further inquiry. At one point there’s a line delivered by a fellow El Paso cop, “Have you seen what’s in her bottom drawer?” Like the creepy secret basement crate, you don’t have to work to figure out what it might be. Just wait around, and the show will tell you.
Then, there’s the final moment of the show, in which a voice on the phone spells out the show’s central political theme: thousands of Mexicans are killed in Juarez and no one cares, but when one white judge is killed everyone goes bananas. It’s a good point, but it’s a point the show should be making, not stating.
Posted by Timothy Earle at 8:53 PM