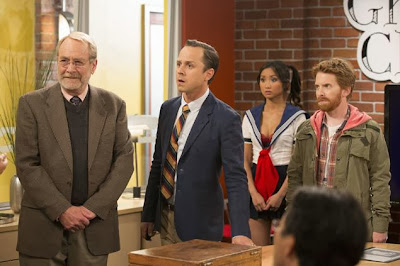 I think your taste in sitcom says a lot more about you than your taste in almost anything else. A guy tells me his favorite sitcom is How I Met Your Mother, I know right away, he is hopelessly romantic, obnoxiously self-aware, and probably a little disappointed with life. If a guy tells me his favorite sitcom is Fox’s new Dads, I know that he is unabashedly mean. The premise of the show is basically that these two successful guys have dads who are straight up terrible people and yet they let their dads manipulate them because at the end of the day, their dads love them, which is stupid in ways I’m sure I don’t need to explain to anyone who’s older than nine.

What really infuriates me about Dads is that the show wants us to laugh at something that’s really not funny at all. There’s one scene where Eli (Seth Green) confronts his father, David (Peter Riegert), about some pretty serious cases of neglect and abuse when Eli was a kid. His father proceeds to make jokes out of what his son is saying and Eli actually says “It’s not funny dad. You can’t just make a joke out of everything.”

Now, this would all be well and good were it not for the fact that there’s a laugh track after every one of his father’s jokes. But, aside from the pretend live audience no one is laughing when Eli’s father makes excuses for emotionally damaging his son. This is the problem: Single camera sitcoms are inherently better when we’re all laughing together. Seinfeld, Friends, How I Met Your Mother, MASH. They were laughing and so were we. There was life, which was sad and wonderful and everything in between, and then there were funny attractive people, making jokes about life’s great mysteries that we could laugh at. Here, we just have awful people who don’t think any of this is very funny, and we’re supposed to laugh at them. Why? Because I guess racism and abuse are supposed to be funny.

And it’s a shame Dads was so terrible, because I actually am in love with Seth Green (he just doesn’t know it yet). I think he’s a brilliant comic and dramatic actor and in my imagination, he’s been spending these last ten years since he left Buffy waiting for the role that will let him really spread his wings as an actor. Or, possibly, he’s just given up. I’m not sure. But, regardless, he deserves better than Dads. We all deserve better than Dads.
Posted by Timothy Earle at 12:43 PM