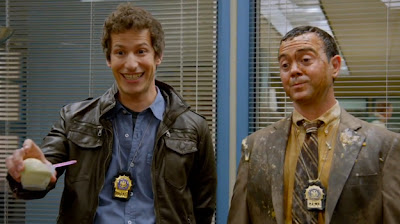 I’m going to come right out and say it: This is an exquisite sitcom. The premise is solid and simple; a precinct in Brooklyn with a smart but childish detective, Jake Peralta (played by Andy Samberg), falls under the new leadership of a reserved, by-the-book captain, Ray Holt  (played by Andre Braugher). But the execution is masterful. The fact of the matter is that almost every sitcom is a slave to jokes per minute. It is the quantifiable measurement of the show’s success. But how do you keep the jokes flying when someone has been murdered? Brooklyn Nine-Nine’s answer is simple: the main character has the emotional maturity of a 10 year old. Not only does this allow for even the darker moments to stay comical, it also makes a strange kind of sense. A man-child, incapable of really feeling the emotional weight of someone’s death would likely be well equipped to solve the murder.

But I don’t want you to get the idea that this is the ‘Andy Samberg Show.’ It isn’t. It’s an ensemble piece at heart. The real shining star here is Andre Braugher who shows that his typical severity can be played for laughs just as well as it was ever played for drama. And, without spoiling anything, there’s a terrific moment where he subverts all expectations about his character marvelously.

And that was why Brooklyn Nine-Nine really caught my attention. There was actual character development beyond wacky cop and straight-laced cop. There was also an actual murder case being solved, but without the typical dozen red herrings of hour-long dramas. I found that oddly refreshing. Once you start writing about cops without really giving a damn about the mystery, their lives become so much more interesting.

At this point, I’ve seen hundreds of murder mysteries on TV, and I can count on one hand how many times I’ve actually been genuinely surprised by the outcome. But that does’t mean we should stop making cop shows. In fact, Brooklyn Nine-Nine makes a compelling case that there are far more stories about cops to be told when the mystery doesn’t really matter.
Posted by Timothy Earle at 12:41 PM