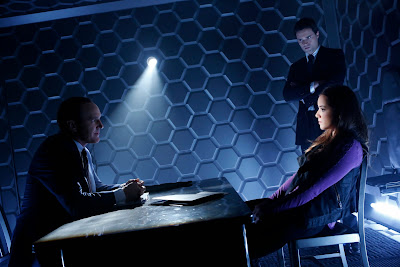 I'm surprised that the Whedon Camp seem to be the only people pulling this off, but if you're going to do live action super heroes on TV, humor is the key. Anyone remember The Cape? Even Arrow, which is enjoying some slightly well deserved success, is always battling with its own silliness. Not on SHIELD. On SHIELD they love their own silliness. They outright say it in this pilot: "It means someone really wanted our initials to spell SHIELD."

The premise is: Secret government branch in charge of managing superheroes makes a super secret team in charge of finding superhero related threats neutralizing them. The team is comprised of rookies, nerdy lab folk, a mysterious bad ass, and all led by that guy who didn't die in The Avengers (or did he?). Colson (Clark Gregg) is back and he has a voice that was made to speak Whedon dialogue. He's sharp and a little dry. Like Giles without the British. Clark Cregg has also had a good bit of time (four movies, not counting cameos) to get his character down, so he does make the other cast members (the young pretty ones) seem a little amateurish. Although, it's not his fault, the characters are all a bit poorly drawn. But, the best way to keep audiences watching while a show finds its footing is to put all your chips on one, excellent character, and that's what he is. So we'll love him until we find something to like in baby-boy secret agent or cute-hacker-girl stereotype.

But even with its flaws, it's hard not to like what this show is trying to do. It's connecting a film franchise with comic book tie-ins while also building its own separate, but related, world to operate in. And the show doesn't waste any time giving you the details of the films it's cleverly dancing around. The Marvel franchise is so incredibly popular, that they can build a pilot around the events of a film, without ever telling you what happened in that film. They just assume you know. It's refreshing to watch a show that isn't constantly checking to see if I'm keeping up.

For the Avengers fans out there, I'd say that if you really liked the conversations between Romanov and Hawk Eye, you'll like this. For Whedon fans, just imagine Dollhouse without the ethical ambiguity (and thankfully without Eliza Dushku). Or Angel without the brooding and lots of money (so, fifth season Angel). But to be honest, all of these comparisons don't really do the show justice. Obviously the history matters, especially with someone of Joss Whedon's cult status, but this isn't a show about history. This is a show about possibilities. This is a show that promises to give us something we really haven't seen before. And I can't wait to see it deliver.
Posted by Timothy Earle at 2:57 PM