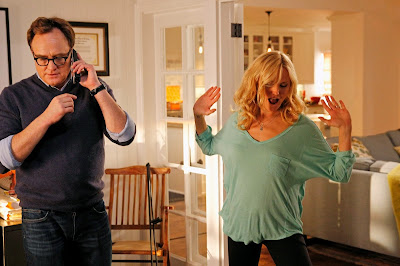 Watching shows like Trophy Wife, I find myself wondering why all family comedies aren't terrific. It seems like such a simple formula. Start with terrific actors, Malin Akerman, Bradley Whitford, Marcia Gay Harden, add cute kids (who are basically a dime a dozen, so that shouldn't be too hard). Add unusual, but vaguely functional family set up. In this case, Malin Akerman plays the third wife opposite Bradley Whiteford, who's previous wives still have a strong hold on his life due to the three kids. Throw in an A plot wacky situation, B plot wacky situation, and C plot wacky situation, then throw everyone together in a final scene in which all is revealed, and then forgiven (sort of). This is how literally every single Modern Family episode runs, like clockwork (like a terrifying steam-punk Emmy-winning machine).

Now, I understand that finding terrific actors is harder than it sounds and Whitford is one of the all time greatest ensemble actors in the field, but so is Allison Janney, and Mom wound up about as funny and likable as a genital wart. So, I find myself looking back at other family comedies and wondering why they aren't all at least as good as Trophy Wife, which emerged fully formed, cracking with wit, explosively funny, and with just enough heart to feel like it's amounting to something. Maybe it's the laugh track on Mom that ruined it, or the mean streak, or just the sets, everything looking sterile and stage-like.

Of course, I'm oversimplifying. Great pain went into writing and directing this pilot from TV veterans. And they probably labored over the jokes, over the timing, over how the drama would mesh with the humor. It's not easy business, comedy, but they made it look easy.

I think part of my enthusiasm for this show is from how stripped down it feels. Gone is the laugh track, the multi-cam. Gone is the faux-documentary feel of Modern Family, or Parks and Rec. There's no gimmick. No whip cuts or staccato flashbacks like 30 Rock. This show isn't jumping on any other show's style, or even drawing that much attention to its own. They're just doing family comedy, with talented comedians and a pretty straight forward style. Sometimes it may be a bit too straightforward (the voice over was not my favorite), but there's something to be said for a show that wants you to be entertained and little else.

Posted by Timothy Earle at 2:31 PM