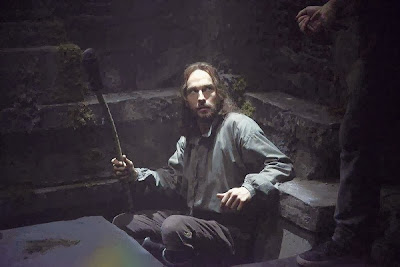 There is something almost irreconcilably dumb about the premise of Sleepy Hollow. A Revolutionary War soldier is transported from the past to present day at the same time as a Horseman of the Apocalypse, who he was ordered to kill by George Washington. There are also witches, and magic, and demons, and the Illuminati. It seems that we live in a day and age where it’s really tough to make a TV show unless it’s based on some pre-existing material. So, while there’s nothing wrong with a campy show about a town prone to supernatural calamity (like say, Buffy), you can hear this show groaning as it attempts to fit into the premise of Sleepy Hollow set in modern day.

Beyond the show’s unspeakably stupid premise there are a number of pilot sins that I’m surprised veterans like Kurtzman and Orci (Fringe, Alias) are making. There’s the obligatory “I just met you, let me tell you an emotional story about my past,” moment. There’s the “I’m a cop who apparently has no idea how police procedure works so I want you to put this man in a mental institution without charging him with anything because I feel like it,” scene which caused some serious shoe throwing. And of course, “I’m a police officer who dictates all my super secret research on witches, in case I’m needed as an exposition device after my death.” I could go on, but it hurts to do this.

So, you’d think, given all the poor choices and dumb-as-nails premise, this show would be a headless mess, and yet… It’s surprisingly not entirely horrible. Its one saving grace is the chemistry between the two leads. Ichabod (Tom Mison) and cop lady Abbie (Nicole Beharie) have a rapport that it immediately strong and very watchable. Ichabod is charming, she’s plucky and strong. These two are surely going to develop into one of the stronger TV couples.

So, optimistically, this show will become a typical supernatural procedural with a little Freemason/Illuminati conspiracy angle and a damned charming lead actor. On the other hand, it could try to be a twist-filled mega-story, eventually crumbling under the weight of its own stupid convoluted premise. Unfortunately, these are the Alias writers, who basically wrote the manual on how to shove a show up its own ass, so I’m not getting my hopes up.

Posted by Timothy Earle at 2:11 PM