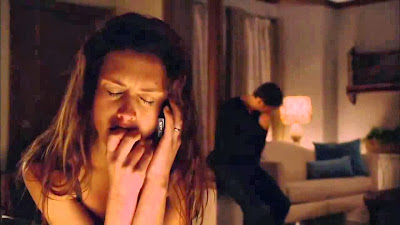 Something magical happens when two people have chemistry. There’s an instant connection, an electric charge in the air. When you see it, you know it, but you can’t describe it. It’s just some ephemeral quality between two people. It’s a wonderful sight but there was absolutely none of it in Betrayal.

The show is about Sara Hanley, the wife of a prosecuting attorney, who begins an affair with Jack McAllister, the in-house counsel for a sinister Chicago crime family. And while both Hannah Ware and Stuart Townsend (playing the star-crossed couple) are decent enough actors, they have so little chemistry that even their sex is remarkably un-sexy. And it’s a shame because this pilot was sturdy enough in its construction. The plot moved a lovely pace, never rushing through anything, letting you really feel the weight of the characters’ decisions. Cromwell is always fantastic and I love watching him ham it up as the patriarch of this crime family. The directing was confident and well-thought out. The tone was soft and hypnotic, gently lulling you into the first steps of forbidden love. And Hannah Ware has a face that was made for the camera.

Eventually, as the story progresses, we meet T.J. Karsten, the possibly mentally disabled son of the crime boss, who winds up the prime suspect in the murder of his own uncle (though we don’t know why he is the prime suspect, yet). The pilot sets up a season-long murder mystery, and all the pieces are in place for it to be an interesting one, with a good deal of soapy twists on the way to its conclusion. The only problem is that the whole show revolves around Townsend and Ware, who have all the blistering sexual tension of two neighboring glaciers. And once you pull out that center peg, the whole show falls apart.

It doesn’t help that this show runs in the same block as Revenge, ABC’s current flagship prime-time soap, because the show really suffers from the comparison. While Revenge constantly jacks up its campiness, driving the show into new uncharted strangeness, Betrayal comes across as sedate and piddling. Who’s to say where this show will go, but without anything resembling a spark between its romantic leads, I can’t see any reason to watch it play out.

Posted by Timothy Earle at 8:20 PM