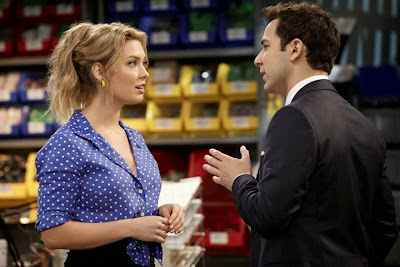 Due to popular demand (meaning two offhand remarks), I've decided to begin rating the pilots like you would a high school paper. “C” being an average score. “C” means not good, but not in any way bad, or enough of both to cancel each other out. “B” means good with flaws. “A” means entirely lives up to its premise, and “F” means I barely held back vomit.

So, here it is. My first official grade for a pilot. What shall I give it?

This was a “C” pilot if I've ever seen one. First of all, it is an hour long comedy pilot, which is always a little off-putting. It is single cam comedy, but with a laugh track, so that doesn't help. And it basically takes place entirely between two locations, and this is a serious problem. The show is about a man struggling between two worlds: The corporate high stakes world, and the carefree bottom floor. The problem is that, as he bounces back and forth between the two, a sense of déjà vu begins to creep in. The initial message is heard loud and clear: The so-called successful people on the top floor appear to be less content than the unsuccessful bottom floor support staff. With only one idea to play with, the constant ping-ponging between two locations just makes the whole show feel like it's retreading endlessly.

But there were up sides. Skyler Astin is certainly charming, and John C Mcginley is basically rehashing his scrubs character, which is totally fine by me. And there's a sense that all these talented comedic actors may one day get a chance to work as an ensemble, and not just a group of comedians, each doing their own thing, oblivious to the other comedians in the room.

But on a deeper level, this show managed to be really extremely average. Average in a fundamental way. It’s the story of a stressed out, uptight guy who’s living the dream but isn't satisfied, who meets a carefree girl who is hot, but not sexy, with a unique fashion sense and a charming spirit, who pulls him out of his white, privileged male depression and forces him to really live his life and listen to indie music. And I’ll be the first to admit, I actually like this story. Most of us do. That's why we keep telling it over and over again. It's just, if you're going to tell it again, you might as well subvert it, or play with, or even acknowledge it. If not, then it's like hearing a bed time story for the hundredth time. It's a good story, but you know all the words and you're asleep before it's over.