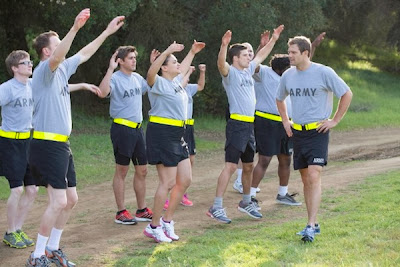 I started watching Enlisted with the same trepidation I felt going into Brooklyn Nine-Nine. These professions (soldier, cop) are not funny. They are the subjects of Drama (capitol "D"). But, whereas Brooklyn Nine-Nine surprised me with its fresh take on the material, Unlisted does not.

The show is about a super soldier (Geoff Stults) who punches a superior officer and is then demoted and sent to rearguard where his two younger brothers (the chronically sarcastic Chris Lowell, and the amazingly air-headed Parker Young) are posted. If you're a fan of Suburgatory, then you're in luck, as Parker Young is playing Ryan Shay again, with little to no variation. In rearguard, Stults' character must reconnect with his family and find some value in the work he's doing, even if it isn't his dream job (which is shooting people in Afghanistan).

If you read into that last parenthetical, you know where I'm going with this. What made Brooklynn Nine-Nine fun was that Andy Samberg plays a really talented police officer who is also a huge goof. And these two things are not mutually exclusive. But it's increasingly hard to believe that a hardened soldier who has spent years in Afghanistan and, as he points out many times, led 50 raids against insurgent camps, would wind up as a carefree jokester, perfect for the leading role in a sitcom. The fact is that war changes people, and usually for the worse. It is the great tragedy of our nation that even the brave men and women who manage to survive combat, frequently wind up losing a part of themselves. Now I'm not going to say that sitcoms cannot be about depressed or unhappy people. In fact, some of the funniest sitcoms are built around unhappiness. But this isn't the case with Enlisted. Instead, Stults plays a happy, well-socialized individual whose only real problem is that the mean ol' army won't let him go shoot people.

The two brothers are very funny as army misfits, as are several of the side characters (who remind me a lot of the support group from Go On). And I find myself wondering why the two brothers aren't the main characters. I can laugh at them and also believe they are real people.

In conclusion, let me say this. I've met a lot of funny soldiers (the Navy specifically attracts some of the funniest people I've ever met). These were men who loved their job, and would make for great sitcom characters. But ask any of them if they would rather be home or in an active war zone, they would likely answer with "Are you fucking kidding me?" because anyone who would rather be in combat has something seriously wrong with them. But this show portrays this bizarre desire as entirely normal, like a hot shot college professor, forced to teach high school. It's as if they copied the formula for any other show of this type and totally forgot to adjust it for the subject matter.