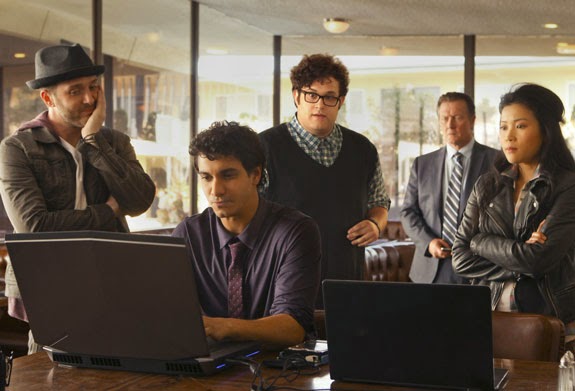 Last season, Intelligence nabbed the award for most mind-numbingly stupid hour of television by a pretty wide margin. And this year, I wouldn't be surprised if Scorpion claims that honor, continuing the time-honored tradition of unspeakably stupid shows about very smart people and computers.

While this show may appear on the surface to be about fast cars that race against planes or other things from the Fast and Furious franchise, it is actually about the world's most exciting IT guys. The premise for the pilot is that a faulty firmware upgrade has caused a bunch of planes to be unable to land and now this ragtag group of "smart people" have to update the firmware while riding in fast cars for some reason.

It is the term "smart people" that infuriates me the most. Shows about smart people always feel the need to prove how smart the characters are, whether it be The Mentalist (pretending that guessing correctly is smart) or Sherlock (giving everyone a medical condition and covering them in crumbs). It's sort of like a magic trick, except everyone in the audience is a plant, so it's not very impressive. When you involve computers it becomes even less impressive. Since computer work is usually slow and not very glamorous, the only way to prove that someone is good with computers is to have them type really fast while other people look over their shoulder and say "Boy, you are super good at computer." And thus we arrive at Scorpion, a show filled with idiots telling smart people how smart they are.

Now, I can't be too hard on shows about flamboyant smart people. I watched seven seasons of The West Wing where the characters inhales their own farts through a respirator. But what The West Wing had, and what Scorpion sorely lacks, is an appreciation for intellect. In the West Wing, everyone is basically a genius, and that's the norm. No one is an outsider simply for being smart. In Scorpion, being smart is regarded as some strange affliction akin to witchcraft. The show even has the audacity to involve a token "not smart" lady to ground them all, because what would they do without a plucky waitress to keep their powerful minds from floating into space? There's a particularly condescending and misguided scene where the plucky waitress tells the genius hacker how hard it is to be a single mom with a troubled son. The hacker tells the plucky waitress that her son is a genius, and that's why he's so hard to raise. This is all fine except her son is clearly autistic. His being a genius has nothing to do with his obvious neurological condition.

Portraying geniuses as fantastical creatures, like unicorns, only serves to distance us from our own intellectual capacity. Instead of portraying geniuses as magicians, the responsible thing would be to then show us how we can achieve these marvelous accomplishments ourselves. For example, take a look at Elementary, a show that allows Watson to learn Sherlock's art. She solves the tough crimes and catches the masterminds, not through stupid parlor tricks, but through hard work, keen rationality, and diligent observation.

In conclusion, this show is about as entertaining as a lame, slightly condescending magic trick. If that sounds like something you would like, I offer this as a gift to you.