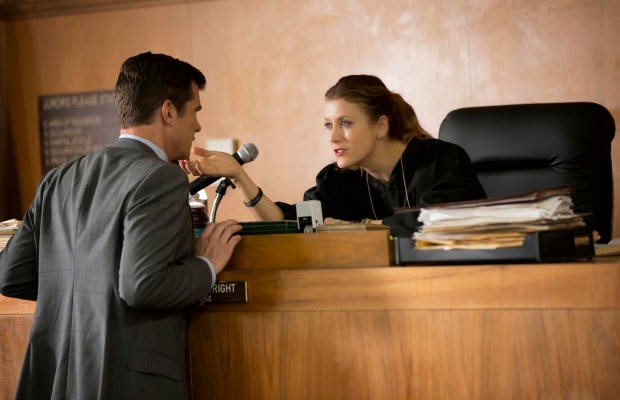 Honestly, this is not a terrible show. And I'm a little disappointed, because I was all primed and ready with some killer puns just in case the show was bad. And no, I won't tell you those awesome Bad Judge puns. I will take them to my grave.

But seriously, how bonkers is it that there are people whose job it is to judge us? To sit above us all and proclaim from on high that we deserve to be punished? It is an accepted part of our legal system, and yet it is a mostly unexamined mindset.

This show takes an interesting approach to the subject by embodying "Judge not, that ye be not judged." During this episode, Bad Judge's Rebecca Wright (Kate Walsh) is constantly judged by other people. And she doesn't get upset, she doesn't resent it. The conflict of Bad Judge is not about being stigmatized. It's not about her crumbling relationships and her constant assholishness. This is not Rake. The conflict arises from Rebecca's relationship with a young boy whose mother Rebecca has sent to jail. It is about her role after her judgment has been made and her punishment has been exacted.

Kate Walsh is excellent. The supporting cast is fine, and Chris Parnell shows up and sprinkles comedy gold on everything he touches. So how do I know this show is going to get cancelled?

Bad Judge is in no way perfect. But it's solid, and could easily grow into something formidable. Unfortunately, I strongly doubt we'll ever see that happen.