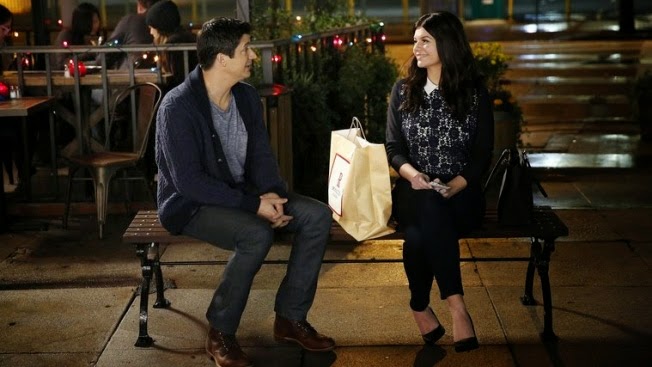 A good ensemble is a rare thing. Just one wrong actor, one ill fitting character, and the whole group feels like a lopsided top. I say this because the show Happy Endings had a great ensemble. It was nearly perfect in that regard. And it was cancelled far too soon. So now we have Marry Me, network television's way of apologizing for cancelling something so good.

It wasn't David Caspe that made Happy Endings such a delightful show. It was the ensemble. Marry Me's ensemble isn't choking on the material, exactly, but nothing's popping. Ken Marino and Casey Wilson, the lead couple, are terrific and very well suited for each other, but the side characters are forgettable and weak. And without that brilliant ensemble, we are faced with raw, unprepared Caspe, and this is a dish that needs cooking.

First of all, Caspe really likes dropping big emotional bombs, right off the bat, and then walking away from them. Happy Endings began with a botched wedding, Marry Me, a botched engagement. In both cases, it is painted as the woman's fault (a pattern I'd rather we not keep hammering deeper). And in both cases, it is something very quickly forgotten, so everyone can go back to being all chummy and making jokes. The jokes are fine, but why even have the big emotional moments if you don't want to follow through?

In Marry Me, Jake (Marino) proposes to his girlfriend, Annie (Wilson), and she winds up embarrassing herself and insulting him in front of everyone, and he basically revokes the engagement. This is a really major emotional event and as soon as it happens, Caspe is already walking back. He's already putting up deflection jokes to undo the damage his characters have done. By the end of the episode, it's all put back together very nicely, and I feel like nothing even happened.

This is not to say that this is a bad pilot. The jokes were funny, the chemistry was instant between Wilson and Marino, and Tim Meadows can do no wrong in my eyes. The problems I have with Marry Me apply to a lot of other sitcoms as well, and maybe it is a compliment that the biggest flaw I can find in this show is with the genre.

There is an addiction to perfection in the sitcom world. Every episode needs to begin with characters being mostly happy and end with them being mostly happy. With Seinfeld, it made sense. The problems faced, episode to episode, were so mundane that they could be solved in half an hour. But when you are cancelling weddings or alienating all of your loved ones in one go, these are problems that take a while to fix in any meaningful way. And this is the Caspe curse: The jokes are funny, the chemistry is great, but nothing has any meaning.