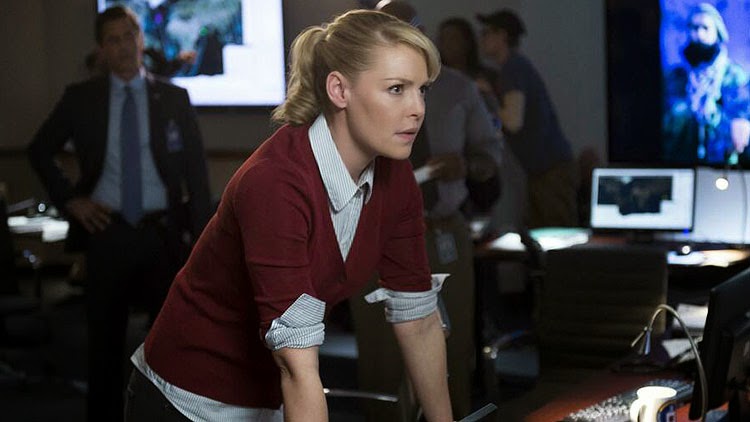 For a few minutes, I thought there was hope for this pilot. The episode starts with a scene of utter chaos, showing us a car being ambushed in Kabul, all shot from one character's point of view. It's a fantastic scene, with the camera seamlessly leaving first person and showing the terrified Katherine Heigl as she tries to crawl out of danger.

Then, people started talking, and all at once, that hope was dashed. Despite the attention-grabbing opening scene, the rest of this episode is so mind-numbingly boring it should be prescribed as a sedative. The show begins with a therapy session that would be grounds for revoking that therapist's license, then dives into a CIA plot line that could strain pasta it has so many holes in it, and ends with an overarching mystery that has all the intrigue of tying your shoelaces.

First, the plot holes. The central conflict of the pilot for State of Affairs is that there is an American doctor who has been kidnapped in Africa. In addition, there is a terrorist (a knock-off Osama Bin Laden) who the CIA has maybe just found, somewhere else in Africa. Charleston Tucker (Katherine Heigl) is the CIA's briefer to the president and she must decide which course of action to take, save the hostage or catch the bad guy. If you are wondering, "Why not save the hostage, which takes like an hour, then go kill the bad guy?" then A+, you pass the test, you can go home. If you are able to suspend disbelief and say, "OK, I'll buy it. Maybe the bad guy is able to pack up and completely vanish in one hour, which also happens to be the hour that they need to go save the hostage," then brace yourself because the plot holes only get wider from here on.

Our subplot for this episode is that a general with ties to the Syrian government is in CIA headquarters for a meeting. But, this general was arrested in France for bringing a cellphone into an intelligence facility and recording classified meetings. And Tucker is concerned he might do this again. So she kidnaps him illegally, and finds a secret hat phone on him. So, if this has you shouting in disbelief, "How has a dude with a listening device in his hat managed to walk into, not one, but two heavily secured intelligence agencies!?" then bravo, stop reading, you get the point. If you are able to somehow stomach the stupidity of all of this, let me tell you about the superfluous drama.

Superfluous drama is what happens when a show has a perfectly natural outlet for great drama and instead decides to inject the show with generic plot lines. For example, State of Affairs is about CIA analysts who brief the president. Having to decide what issues in the whole world are worthy of the president's ear? That is real, natural drama. Adding a subplot where your fiance, who was also the president's son, got killed by terrorists is superfluous drama.

I'll admit that sometimes TV viewers like old ideas dressed up in new clothes. But State of Affairs isn't even that. It's old Katherine Heigl in exactly the same clothes as before, only now they've thrown a leather jacket on her so you know she's super edgy.