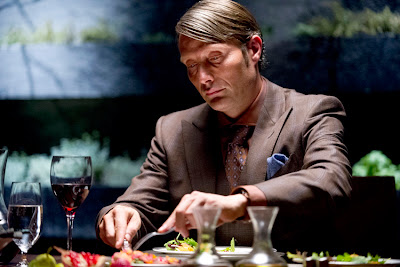 I’m getting sick of serial killers. There are so many of them and they aren’t even all that interesting. They’re all far too prone to theatrics and gaudy contrivances. Every plot point feels like a variation of the world’s dullest theme. Even the lingo has become mind numbing. The words are so familiar that they begin to lose all meaning. I don’t think I’ve ever seen a TV pilot about serial killers that has actually impressed me.

All that being said, you could do worse than Hannibal. A lot worse.

Bryan Fuller (the show-runner behind the brilliant, though saccharine-to-the-point-of-causing-cavities, Pushing Daisies) makes several good decisions, which keep Hannibal from falling down the slosh hole of serial killer TV. The show's focus falls squarely on the main character, Will Graham, a vaguely autistic FBI profiler, played by Hugh Dancy. Graham’s great talent and fatal flaw is that he can completely empathize with serial killers, though he is not one himself. He understands the urges of monsters, yet he possesses the humanity to find those urges terrifying. He’s a conundrum of a character and totally worth a series devoted to him.

Once Graham’s character has been established, the pilot follows a fairly standard plot. Graham goes from crime scene to crime scene, piecing together the mind of a Midwest serial killer. The killer’s MO is not terribly interesting; he kills pretty young women. But Graham’s method of solving the mystery is totally engrossing. Incidentally, a pre-Clarice Hannibal Lecter is working with Graham to find the killer (though he doesn’t actually help much).

In many ways, Hannibal is irrelevant in this episode. Nothing he does progresses the plot in any way, and you’d think one mentally unstable profiler would be enough. But, Mads Mikkelsen’s take on Hannibal is intriguing (albeit occasionally unintelligible), and I see how his relationship with Graham will provide the show with a sturdy foundation in future episodes. In a lot of ways, Hannibal ends up as the Scully to Graham’s Mulder, always appearing to be the sanest man in any room, despite the eating people thing.

The tone of this episode also manages to find a fresh leaf on the rotten head of lettuce that is serial killer TV. The focus is more on the imagery of madness than the indecency. The shock and horror of garish murder and bloody corpses is abandoned in favor of pensive, placid crime scenes. The horror here is not in the presentation of the crime, but the re-creation of it. The result is a pervasive hypnotic feel, appropriate for a show about mad psychologists.

I wouldn’t say I’ve had my faith in serial killer TV restored, not with just one pilot. But I’ll certainly come back to watch episode two, maybe with some fava beans and a fine Chianti…