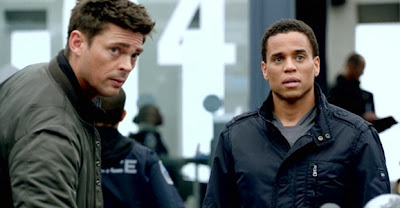 I want to start by saying that I really wanted this pilot to be good. I don’t want anyone to think that because I so often say nasty things about TV pilots I want them to be bad. I want them all to be good. I love TV and I’m always willing to give new stories a try. Unfortunately, this was not a new story. It was an old story, told poorly. In short, it was crap. But crap with potential.


First of all, aesthetically, this pilot looks like a stale, uninspired turd. The locations are divided between the Chinatown set from Blade Runner (complete with Chinese black-market technology vendor), the police headquarters set from Fringe, and a couple of outdoor crimes scenes that very purposefully shelter us from any futuristic sightseeing. The world feels distinctly incomplete, and what little bits we get appear to be lifted, not all too gracefully, from other more complete scifi worlds. In the end, I feel like the creators are more invested in their budy-cop story than they are in creating an imaginative, distinct universe. Unfortunately their budy-cop story is also crap.

Stop me if you’ve heard this one before. Old grizzled cop, dishonored because of a past mistake, lured back to the force by the prospect of revenge, paired with by-the-book pariah. Initially at each other’s throats, these two cops soon discover that they can learn from one another, and eventually they grow grow a bond, deeper than brothers. Please. Stop me if you’ve heard it.

So, nothing too unique in the story realm, but everyone knows that good TV is about the performances, the characters. Sure Friday Night Lights was a soap opera, but it was elevated to TV sainthood through its comfortable, stunning performances. And this show even has FNL alum Minka Kelly, so I’m sure it won’t be ruined by Karl Urban’s insatiable hamminess. No? Okay then. It was a long shot.

As for potential – as for any chance of this show eventually settling into something watchable, I’m not even sure. The show’s main antagonists are as uninteresting as they are shady (and, I should mention, very stupid), and the show’s main story arc seems to be pretty lame.

But, as I considered turning this episode off before it was over (knowing exactly how it would end), I remembered that this is a JH Whyman + JJ Abrhams show. These are the Fringe guys, and while Fringe wound up becoming one of my favorite scifi shows on TV, it started out pretty bad. Maybe not this bad. But it suffered from over-acting, lame antagonists, and a mostly awful first season. So maybe, just maybe, there’s a chance for “Almost Human” down the line, once the kinks are worked out and better writers get a chance in the hot seat. In the meantime, this show provides very little, unless you are working on a "Michael Ealy smirking" supercut, in which case, you just hit the jackpot.