Everything about this pilot is stupid. 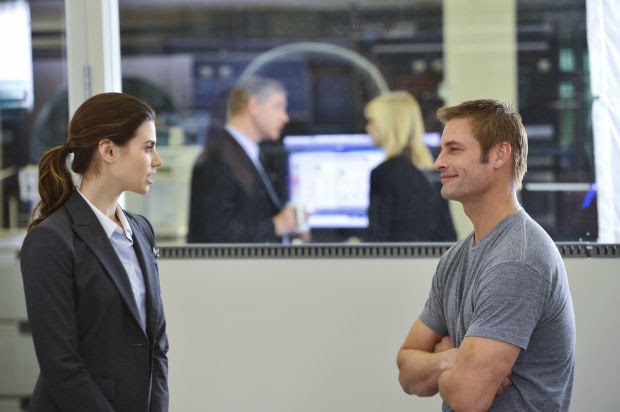 The premise is that Josh Holloway is a super sexy smart one-man army. He kicks ass and smirks in the face of danger. He also has a computer chip in his head which allows him to seamlessly access the vast network of collective human intelligence. Which is, coincidentally, exactly what this show is lacking.

So, super soldier Josh Holloway (who isn't even bothering to play a character besides Josh Holloway) is paired with a fresh new bodyguard, Meghan Ory, because the show wants us to believe this is something he needs despite the fact that he's a one-man army, and she looks like she skipped her last 300 meals. The reason she's hired is that Josh Holloway is a loose cannon, a risk taker, who doesn't do things by the book. So then she has to keep him in line.

There are many problems. First, why install the chip into the mind of someone who constantly breaks protocols? Why not just install it in a regular guy? The show posits that only a very specific brain can handle the chip and they're basically stuck with him. Okay, then why even let this guy operate in the field? He's equipped with a super secret multi-million dollar weapon and they just let him roam around? There's something so incredibly unbelievable about the whole situation, beyond the general unbelievably of someone like Josh Holloway working for the government.

Now, maybe veracity isn't your thing. Maybe, you're just in it for the chance to watch a group of characters work together. That's fine, go watch Chuck. I know, it's cheating to compare one episode of a show clearly finding its footing to a mammoth like Chuck. But I will point out that part of Chuck's appeal was that, right off the bat, you saw how these characters would fit together. You saw the infinite number of fascinating scenarios that might erupt between two nerds and two highly trained operatives. But Intelligence doesn't have any contrast. All the characters are vaguely smarmy government operatives. You don't get the feeling that Josh Holloway needs a bodyguard, or even a costar.

The one human element of this pilot is that Josh Holloway's wife was caught at the scene of some terrorist attack, being a terrorist, and now he's torn because the love of his life is a "bad guy," which is basically the same plot of Almost Human's lousy pilot. Sometimes, I wonder if executives from all the major networks meet on a hill somewhere and slaughter a goat as an offering to the great blood lord Baal. Whereupon he pronounces the new plot device that they should all be using. If so, they should step up to virgins, because Baal is clearly short-changing them.