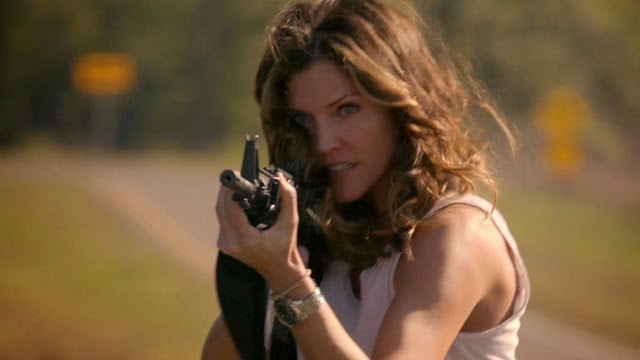 Mick Jagger once said (without a trace of irony, I imagine), "Anything worth doing is worth overdoing," and while Mick clearly misunderstood the meaning of "overdoing" (I can only assume he thought this meant doing something over and over and over again), it's not a bad mantra to live by, especially if you are remaking a Latin TV show like Mujeres Asesinas.

The concept is pretty straight forward. Molly Parker (Tricia Helfer) is one of only two female Texas Rangers in the whole state and she's brought in to investigate the murder of the assistant DA in San Antonio. There's a complicated murder conspiracy involving the cartel (obviously), and it ends with a rogue police operation involving a car chase and a grenade launcher.

But what makes this show so fun to watch is that it's not trying to hide from its weak spots. There is an agreement between the director (the exceptionally prolific Lawrence Trilling) and the audience, that this is a silly show. For example, the show superimposes Tricia Helfer's silhouette over the star in the Texas flag, after she's just finished a trumpet solo (NOT MAKING THIS UP). There's a bit of that old Robert Rodriguez flare to it. The first scene in particular, in which a woman in a red dress walks into a wedding and shoots the bride, looks like it could have been pulled straight from Desperado (and then cleaned up a bit for Network TV). Every cut-to-commercial is preceded by a freeze frame of the action in blood red. There's a sex scene where the camera drifts to the two lovers' guns lying sweetly together on the desk by the bed.

And yet! Despite how obviously silly it all is, the characters never suffer for it. They feel real, despite the camp. This is due, in large part, to strong actors, but also to some wonderful human moments. One moment in particular felt so loving and natural to me, where Molly awakens in her bed, then lifts the covers to reveal her niece sleeping on top of her. We aren't told to like these people. We are simply let into their world and can't help but like them.

In closing, I'd like to compare this pilot to another show (which, I've noticed, is kind of becoming my thing now. I promise not to do this in my next review). As weird as this sounds, I saw a lot of what I saw in Ugly Betty. Both are adaptations of Latin TV shows. Both bring that same campy, stylish feel of the original, and then temper it with a totally sympathetic central character. Both shows seem poised to slip into a Benny Hill action sequence at any moment, but at the same time, perfectly willing (and able) to tug some serious tears out of the audience. The only way in which Killer Women doesn't hold up when compared to Ugly Betty is its lack of Hispanics. Considering that this is show about Texas and based on an Argentine show, it seems a shame that the two main characters are white. But, on the diversity plus side, the show passes the Bechtel test several times over in just one episode. Also, did I mention the trumpet solo?